skip to main | skip to sidebar

Having fun Down Under 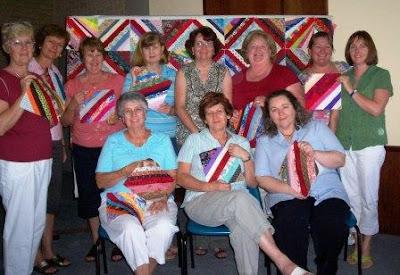 Stephanie (seated, far right) has been a prolific contributor of blocks to the Australian HeartStrings Quilt Project.

Stephanie hails from Perth, which is the state capital of Western Australia. Perth is proud to boast that it is the world's most remote city. The closest city of any similar size is Adelaide, the capital of South Australia - 2,736km (1,700 miles) away. That's about the same distance as Los Angeles to Chicago!

The good news is that quiltmaking is alive and well in Perth. Not only has Stephanie made a mountain of blocks herself, her boundless energy and commitment to helping those less fortunate is apparently contagious, as she had no trouble persuading members of her local quilting group, Stitch by Stitch (pictured above), to spend a day making HeartStrings blocks.

They made 58 blocks using red centre strips, in keeping with the Project guidelines. Some have already been included in two tops now with Robina in Canberra (also marked on the map) for machine quilting. The remainder will be used in the next month or so as more tops are made.

What's more, The Stitch by Stitch group members also very generously agreed to pose for photographs, some of which will be published in the May issues of Australian Quilters Companion and Homespun magazines. (More on that another time.) I've been able to persuade Stephanie to allow the photos to be uploaded on to our blog, so we can all share them. 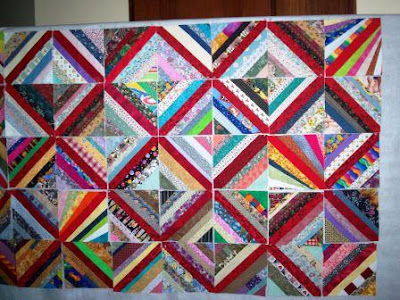 A display of 35 of the blocks made by the group. 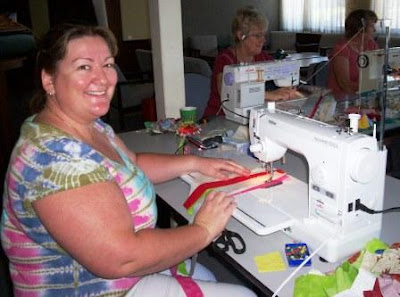 Stitch by Stitch member Dee hard at work on her string blocks.

Thanks very very much ladies. It was wonderful to receive your blocks.

Fabulous work ladies - keep on stitching and spreading the word :)

Need more information on the Project?